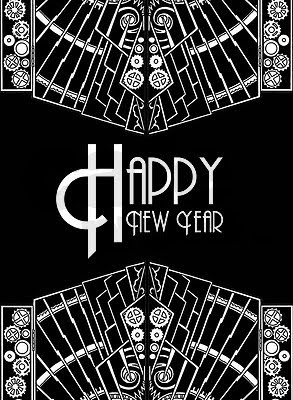 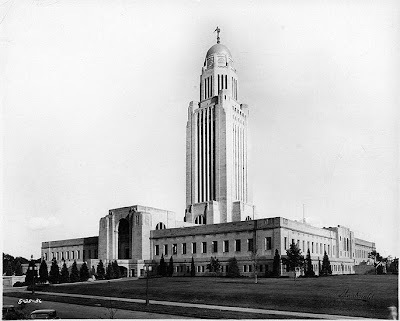 The Nebraska State Capitol, located in Lincoln, Nebraska, is the capitol and seat of the Nebraska Legislature and houses other offices of the government of the U.S. state of Nebraska. It is one of the most distinctive statehouses in the United States. It is 400 feet (121 m) tall. There is an observation deck at 250 feet (76 m). There are 15 floors. It is the 3rd tallest building in the state, and the tallest in Lincoln, Nebraska. This capitol building's height is surpassed only by the Louisiana State Capitol. The Louisiana State Capitol is 34 stories but was influenced by the Nebraska State Capitol's design.
The building was designed by Bertram Grosvenor Goodhue and constructed between 1922 and 1932. The Indiana limestone structure draws on both Classical and Gothic architectural traditions, but represents major innovations in state capitol design (Wiki).

Image: nebraskahistory.org
Posted by Lord K at 3:56 AM 1 comment:

Books for the Masses 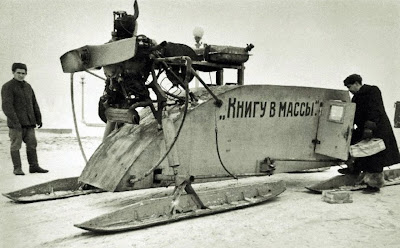 The Strength of the Curve 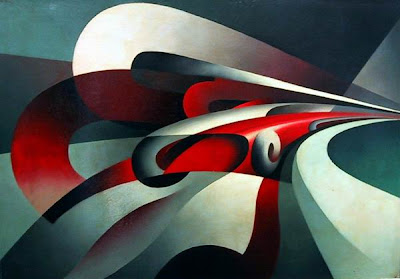 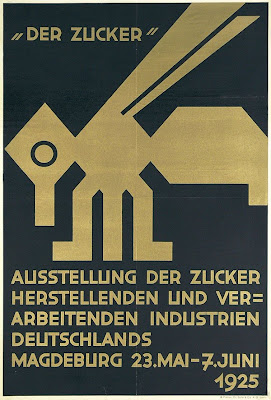 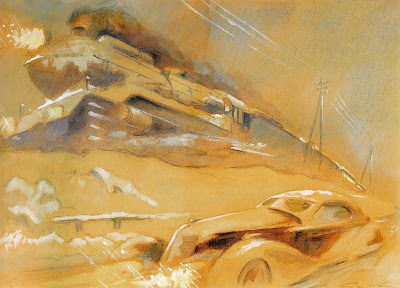 via Vintage Poster
Posted by Lord K at 3:35 AM 1 comment: 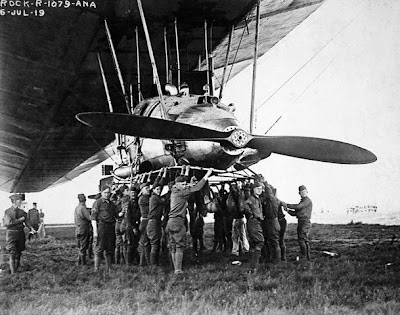 Email ThisBlogThis!Share to TwitterShare to FacebookShare to Pinterest
Labels: rail, US 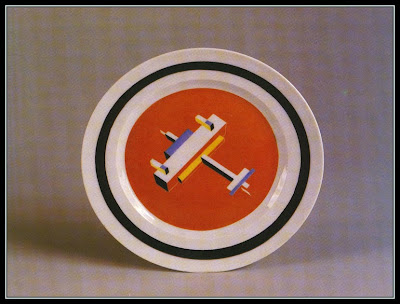 Jordan (Mr. Bodewell around here) is not only a great guy with a wife and kid, but he also runs the steampunk/alternative music label Sepiachord. You might have seen him on Dieselpunks sharing new music with us every day, or you might have listened to The Sepiachord Passport this year. As one of the cornerstones of our community, I love Jordan and everything he does for us. 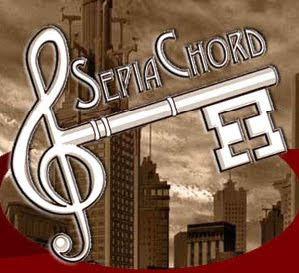 Long story short, Jordan's family recently got hit with some very serious medical bills. Even with insurance, payment plans, and a second job, Jordan is going to have to turn off everything and close Sepiachord for at least a few years until he can get back on his feet.

So, if you have a few quid and a heart, you can help my friend give his family a good holiday. We may not be able to pay off everything, but we can at least make sure Jordan can keep his family warm and fed this Winter.

Donate directly to Jordan and Sepiachord via PayPal / Credit Card

Purchase a copy of The Sepiachord Passport
Posted by Lord K at 1:11 AM No comments:

Email ThisBlogThis!Share to TwitterShare to FacebookShare to Pinterest
Labels: network 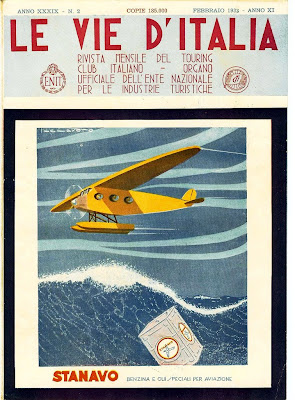 As World War II was drawing to its final conclusion, German naval designers in late 1944 were proposing some truly radical designs under desperate circumstances. Among them was the final evolutionary step of the K-Verband development for their hydrofoil attack boat projects.

Designated the TR-5b, the futuristic Tragflügelboot concept called for the addition of twin turbojets to be added to a VS- type hydrofoil to create a high-speed, heavily-armed hydrofoil fast attack craft. The turbojets (two Jumo 004s or He S 011s) were to be mated to the hydrofoil to allow a drastic increase of speed during the final attack phase and disengagement of enemy vessels.

Although tests with the radio-controlled jet powered boat Tornado of 1944 revealed several problems with this kind of propulsion (only viable in calm seas and with persistent control problems), the addition of turbojets for the TR-5b was seen as a possible solution to increase the chance of surviving an attack against Allied ships.
Armament has never been disclosed for this vessel but from the depictions looks like standard S-boot armament of guns, torpedoes, or mines.

However, this project arrived too late and held no significant advantage over the German S-boots. Likewise, the German explosive speedboats also came to nothing except some experimentation. The TR-5b was to start construction in early 1945 but was cancelled instead by the realities of the naval war. 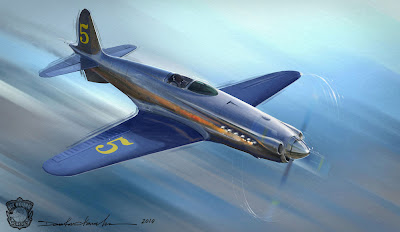 Artist: David Chambers
Posted by Lord K at 3:47 AM No comments: 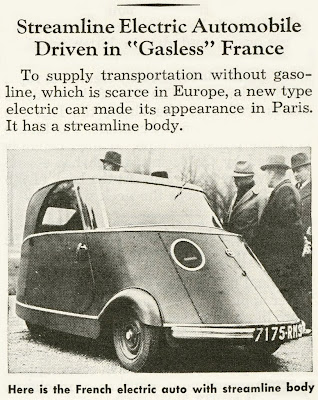 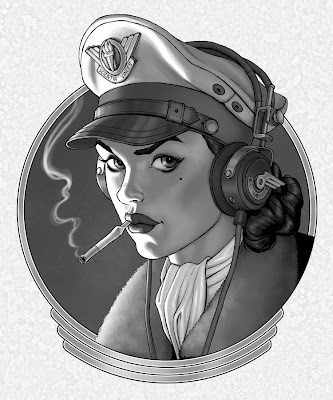 via Dieselpunks community @ LJ
Posted by Lord K at 3:26 AM 2 comments: 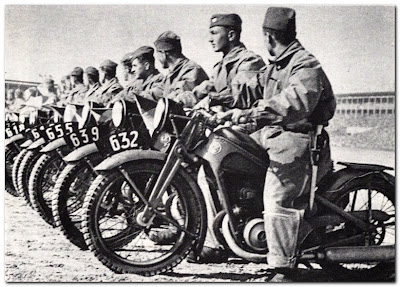 via militaryphotos.net
Posted by Lord K at 3:19 AM No comments: 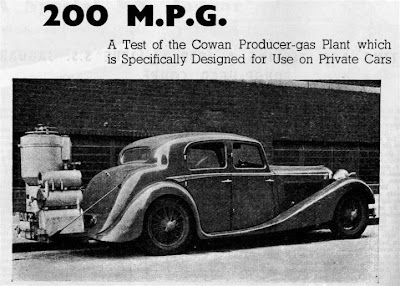 Parks the Circus the Klan the Press 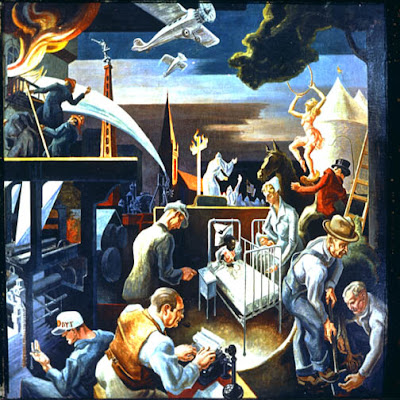 Brief info
Posted by Lord K at 3:19 AM No comments: 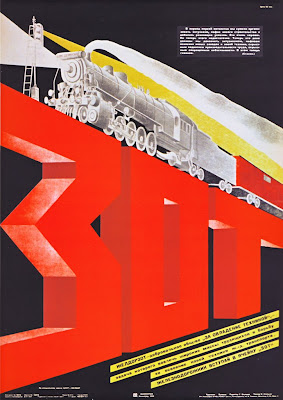 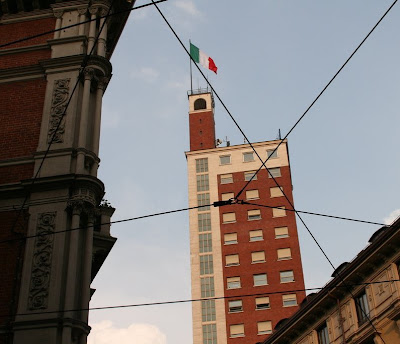 Photo by nicolasnova
(Full frame @ Flickr)
Posted by Lord K at 8:11 AM 3 comments: 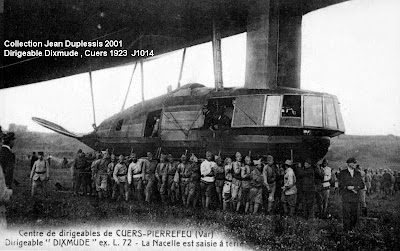 In early 1920s the Dixmude (f. German LZ114/L72) was the world's largest dirigible.
In Cuers-Pierrefeu, 2 hangars are built to receive the air giant. 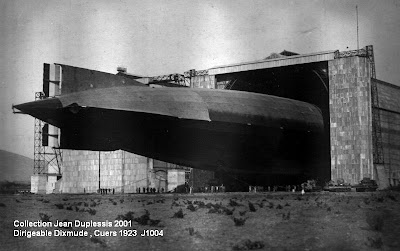 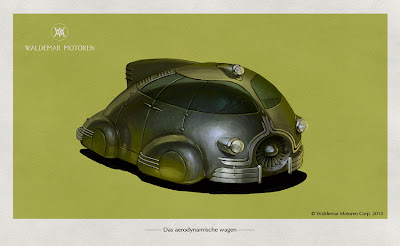 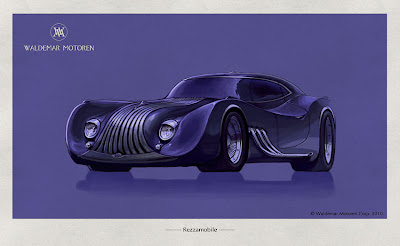 Ordered from Armstrong Whitworth at Elswick in 1914 as a "light battlecruiser" fitted with two 18in guns and laid down on 8th June 1915. She was launched for completion in that design on 15th August 1916.
On 26th June 1916 it was decided to convert the ship for use as an aircraft carrier. In 1921 she was taken in hand for a third change in design. Work was carried out by HM Dockyards at Rosyth and Devonport and provided a full length flight deck with Bridge structure and funnels removed. In addition there was a small lower flight deck forward. This was dispensed with after aircraft weight and speed increased. Exhaust gasses were discharged by uptakes led to the stern. The bridge facility was replaced by an open type at the deck edge. The ship joined the Fleet in 1925. Further changes were made to the stern structure and the quarterdeck was raised to flight deck level between 1931 and 1932. The ship was modernised and refitted before the outbreak of WW2 and she re-entered service with six twin 4” mountings controlled by two gunnery directors for AA defence. 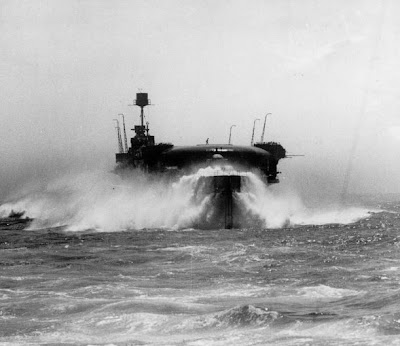 Displacement as an aircraft carrier was 22,450 tons with an overall length of 786 feet 3 ins., a beam of 89 feet 9 ins. over bilges and a draught of 25 feet at full load. The main propulsion was provided by steam turbines of 90,000 SHP driving four shafts to give speed of 30knots. Armour was provided for protection of machinery and steering gear with external bulges for underwater protection. Armament provided included the six twin 4in mountings and three eight barrelled 2 Pdr Pom-Pom mountings. During WW2 this was increased by single 20mm Oerlikon mountings to improve defence against close range air attacks. The radar fit was minimal, compared with other Fleet aircraft carriers and was fitted during wartime refits as was required to suit deployments. Total complement including aircrew exceeded 1200. By the end of WW2 about 30 aircraft could be carried, depending on type embarked.
This ship was extensively deployed during WW2 until withdrawn from operational use when modern Fleet Carriers became available supplemented by several Light Fleet and Escort Carriers. She took part in operations off Norway throughout the war, carried out deliveries of aircraft to Malta and to the Middle East via West Africa as well as providing air cover for Atlantic and Malta convoys and supporting the allied landings in North Africa.
After the end of hostilities in Europe she was placed in Reserve and sold for breaking-up in 1948. 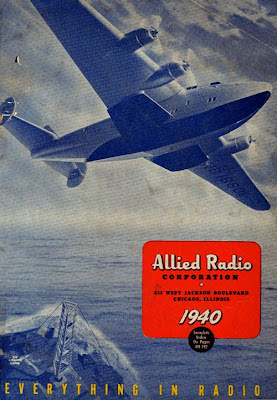 Email ThisBlogThis!Share to TwitterShare to FacebookShare to Pinterest
Labels: aircraft, communications, US 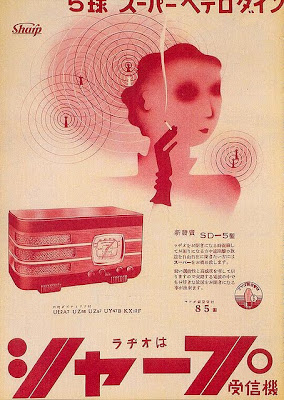 via Vintage Ads
Posted by Lord K at 4:07 AM No comments: 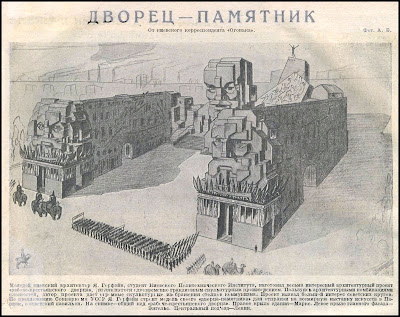 Designed by J. Gorfein in 1925, this Workers and Peasants Palace has three faces: Marx (on the left), Lenin (centre) and Engels. It's only a concept, of course, lucky enough to be published in popular Ogonyok weekly.

Click on the picture to enlarge
(and see elephants and camels on parade!)

The Werkspoor Jumbo was a 1930s Dutch biplane freighter aircraft design by Joop Carley and built by Werkspoor. Only one aircraft was built (registered PH-AFI) which was sometimes called the Carley Jumbo and was operated by KLM for two years. 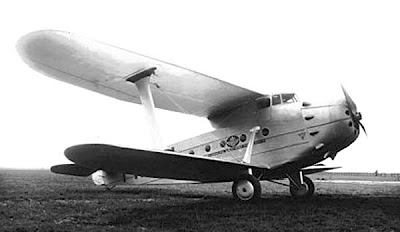 Ordered in 1927 as a specialised freighter for KLM. The Jumbo was a large single-engined biplane fitted with two large cargo doors.

Delivered in 1931 it was operated by KLM between Amsterdam, Rotterdam and London for two years and was then passed to the airlines training centre which operated it for the next eight years. In 1938 it was described as a good trainer The aircraft was destroyed at Amsterdam-Schiphol in a German bombing raid on the 10 May 1940. 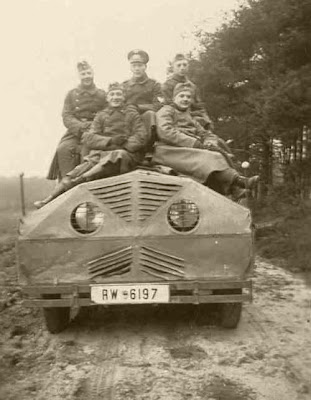 Adler PZ Spähwagen
Built for Reichswehr
c. 1930
Posted by Lord K at 4:03 AM No comments: 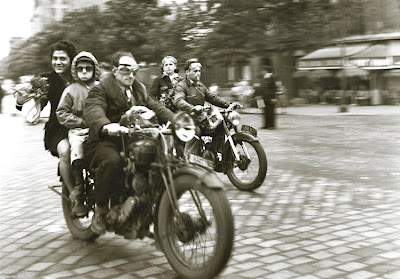 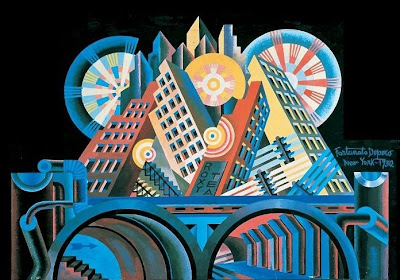 See more Depero's artwork @ Dieselpunks.org
Posted by Lord K at 3:36 AM No comments: