See the gallery (NEW!), together with some stats, @ Dieselpunk Encyclopedia 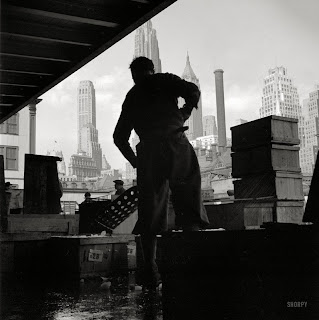 A scene at the Fulton Fish Market, New York
Medium format negative by Gordon Parks for the Office of War Information
June 1943

via Shorpy
Posted by Lord K at 1:30 AM No comments:

Fuel in Their Floats

The design of the Latécoère 298 originated in a French Navy requirement for a torpedo bomber to replace the unsuccessful Laté 29 (below) that had just entered service.

The prototype Laté 298, as it came to be known, was completed at Latécoère's Toulouse plant in 1936 and first flew on 6 May 1936. It was designed as a single-engined, mid-wing cantilever monoplane, powered by an 880 hp Hispano-Suiza 12Y twelve-cylinder liquid-cooled engine. Two exceptionally large floats were attached to the fuselage by struts, each one containing a fuel tank.

A ventral crutch served to accommodate different payloads, depending on the mission. It could carry one Type 1926 DA torpedo, two 150 kg bombs or depth charges. Additional armament consisted of three 7.5 mm Darne machine guns, two fixed forward firing and one rear-firing on a flexible mount.

The first Laté 298s entered service in October 1938 with the Escadrilles (squadrons) of the Aéronautique Navale, the French Navy air force. Some were based in naval bases, and others on the seaplane tender Commandant Teste. At the outbreak of the war four squadrons flew with this aircraft, and by May 1940, when the German offensive in the west began, 81 aircraft equipped six squadrons.

The Laté 298s first saw action during the Battle of France in 1940. They were used at first for maritime patrol and anti-submarine duties, but did not meet any German ships. Later, as the Wehrmacht drove through France, they were used to harass and interdict armoured columns. Despite not having been designed for this role, they performed reasonably well, suffering fewer losses than units equipped with other types.

After the armistice of June 1940, the French Navy under the Vichy regime was allowed to retain some Laté 298 units, and captured aircraft were used by the Luftwaffe.

After Operation Torch, French units in Africa sided with the Allies. In this guise, the Laté 298 was used for Coastal Command missions in North Africa, in cooperation with Royal Air Force Wellingtons.


Artwork: Lucio Perinotto
Info: Wikipedia
Posted by Lord K at 2:26 AM No comments:

The Carden-Loyd tankettes by Carden-Loyd Tractors, Ltd., were promising enough that the company was purchased by Vickers-Armstrong. They developed light, floating tanks to General Staff requirements (A4E11 etc). In April 1931, Vickers-Armstrongs conducted several successful tests of these light vehicles in the presence of the press. Publication of the design and testing by the press attracted the attention of the Red Army Department of Motorization and Mechanization: the small tank was well suited to the new armament policies of the Red Army, as well as possibly being able to replace the older T-27 tankette, which never performed well in combat.

The Selezen ("Drake", Ru. Селезень) program was established in order to construct a similar amphibious tank with a layout based on that of the British prototype.

The first Selezen prototype, which was designated the T-33, was built in March 1932 and showed good buoyancy during testing.

However, the T-33 did not perform satisfactorily in other tests and was too complicated for the existing military-industrial complex to produce.

As a result, it was not mass produced or equipped in large numbers.

Sources: Wiki (text), Bronetehnika (images)
Posted by Lord K at 1:30 AM No comments:

The MIAS machine gun carrier built by Ansaldo in 1920s

Brochure
Posted by Lord K at 1:30 AM No comments:

Source
Posted by Lord K at 1:30 AM No comments:

Photos by shordzi @ Flickr
Posted by Lord K at 1:30 AM No comments:

The Peto, submarine-launched floatplane, was amongst the most technically difficult tasks that Parnall took on. It was a two-seat reconnaissance float biplane of very small overall dimensions designed to be folded and carried in the confines of a submarine.

Of mixed wood, fabric, aluminium and steel construction, it had unequal span, warren-braced rectangular wings and the initial aircraft was powered by a 128hp Bristol Lucifer with mahogany plywood "Consuta" type floats.

Performance on test was generally satisfactory but modifications were put in hand and the machine was rebuilt with new wings, metal floats and a 169hp AS Mongoose engine.

Tests both on the sea and in the air showed that Bolas had fully met the requirements and it was officially judged to be exceptionally good; it was successfully catapult launched from the ill-fated submarine M2 but the concept of submarine carried aircraft died after the loss of the M2 which took with it one of the Petos.


From PARNALL - Bristol's Other Plane-maker by Alan Webb
Posted by Lord K at 1:30 AM 2 comments:

More Dobrolet posters by Rodchenko (One, Two)
Posted by Lord K at 2:12 AM No comments:

via paul.malon @ Flickr
Posted by Lord K at 2:18 AM No comments:

Email ThisBlogThis!Share to TwitterShare to FacebookShare to Pinterest
Labels: architecture, art, art-deco, US

Far From Being Typical

The Beika and Beira are 35mm folding cameras made by Beier in the 1930s. On all the models, the square front standard is mounted on scissor struts, and there is a focusing lever, moving the lens and shutter unit as a whole. The camera was released in 1931 as the Beika. It has a folding optical viewfinder, and takes 3×4cm exposures on unperforated film, loaded in special cassettes. (When loaded with perforated film, the usable exposure format is about 24×40mm.)

The name was changed to Beira in 1932. The reason for that change is not known for sure, but maybe "Beika" sounded too close to "Leica". The camera was sold by Birnbaum as the Birelle.

In 1935, a coupled-rangefinder version was offered, incorporating the Okula prismatic rangefinder made by Ernst Krauss in Jena. With that equipment, the camera was called Beira Okula or Beira II.

Carden Loyd Mk IA
Posted by Lord K at 1:30 AM No comments:

A pair of Women Accepted for Voluntary Emergency Service (WAVES), Yeoman Second Class Blanche Oswald of Philadelphia (left) and Yeoman Third Class Betty Martin of Danbury, Connecticut, salute the colors during a visit to USS Missouri (BB 63). They are standing next to one of the ship's 40mm gun mounts.

Source: Naval Aviation Museum
Posted by Lord K at 1:20 AM No comments:

Email ThisBlogThis!Share to TwitterShare to FacebookShare to Pinterest
Labels: navy, photo, US

Just Out of Print

Diesel City. By Stefan. 200 pages. In French and English. With forewords by Tome Wilson (who is also responsible for the English text version) and Nick Ottens (of the Gatehouse fame).

ORDER THE BOOK NOW!
Posted by Lord K at 1:30 AM No comments:

Shipping and the City

In 1934, the French air ministry issued a specification for a long-range flying boat to be used by Air France to operate services over the South Atlantic between Dakar in Senegal and Natal in Brazil.

The H-47 was a conventional, high-wing design with the cabin and flight deck fully enclosed within a streamlined hull. The four engines were mounted in two tractor-pusher pairs on the upper wing.

The prototype H-47 first flew from Antibes on 25 July 1936, and was destroyed in a crash in May 1937 that was attributed to a wingtip float breaking away whilst the aircraft was in flight. Nevertheless, Air France went ahead with the purchase of five similar (though strengthened) machines, designated H-470, which were put into service as mail planes. These machines were impressed into the French Navy at the outbreak of the Second World War.

The four remaining aircraft remained in use with the Vichy French Navy following the French Armistice, being used for transport between France and Tunisia, before being transferred to Dakar in Senegal in June 1941. The last H-470 was scrapped in August 1943 when stocks of spares ran out.

Source: Wikipedia
Posted by Lord K at 1:30 AM 2 comments:

The Amtsanschließer 33 was used to connect an army field telephone to the 'conventional' network. 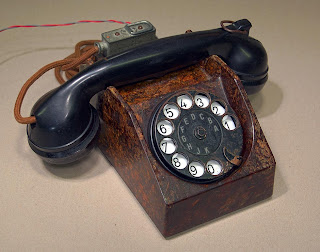 It could also serve as an independent telephone set. 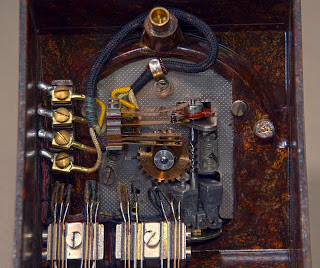 And it can be still used today, with the networks where Pulse Dialing is enabled. 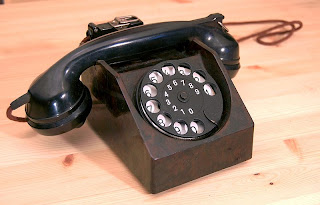 A splendid example of the "Southern Electric" style of publicity used by the Southern Railway of England during the 1930s, when the company was engaged in the large scale electrification of many of its South East England rail lines. The use of the finger to emphasise the stylised electrified lines along with the lightening flashes employed by the Southern as a 'house style' is eye catching.

By mikeyashworth @ Flickr
Posted by Lord K at 1:14 AM No comments: