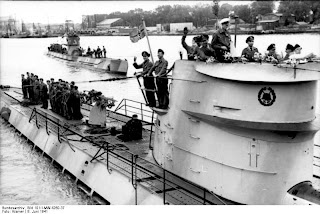 14 boats of the Type IXB were built by AG Weser Bremen. This was the most successful class of U-boats, or for that matter any class of submarines based on tonnage sunk per boat during the Second World War. Each of these ships sank over 100,000 tons of Allied shipping. They were slightly larger than the IXA boats and had a significantly longer operational range of 24,600 miles on the surface at 10 knots. The U-107 of this class had the most successful war patrol of any U-Boat in the war sinking nearly 100,000 tons of Allied shipping off Freetown Sierra Leone while U-103 sank over 237,000 tons of Allied shipping during 11 war patrols over the course of 4 years. These boats were involved in Operation Drumbeat off the coast of the United States in early 1942.
U-123, commisioned on May 30, 1940 was a Type IXB U-boat of the German Kriegsmarine that operated during World War II. Her victories: 42 ships sunk for a total of 219,924 gross register tons (GRT). Scuttled at Lorient, she was raised after World War II to became the French submarine Blaison (Q165) until she was decommissioned on 18 August 1959.