She commissioned in May 1941 and was in the Atlantic during "close to war" and wartime operations for more than a year. From April into July 1942 Washington worked with the British Home Fleet in the North Atlantic.

She was then overhauled and sent to the South Pacific, where, in September, she joined U.S. forces engaged in the Guadalcanal Campaign. On 14-15 November 1942, she was flagship of Rear Admiral Willis A. Lee in the last part of the Naval Battle of Guadalcanal. During that night action, her sixteen-inch guns fatally damaged the Japanese battleship Kirishima.

Washington worked in the South and Central Pacific into 1944. She took part in the invasions of the Gilbert Islands in November 1943 and the Marshalls early in the new year. On 1 February 1944, during the latter operation, she crushed her bow in a collision with the battleship USS Indiana (BB-58). Following repairs, Washington rejoined the fleet in time to participate in the Marianas invasion in June 1944, and in the resulting Battle of the Philippine Sea. 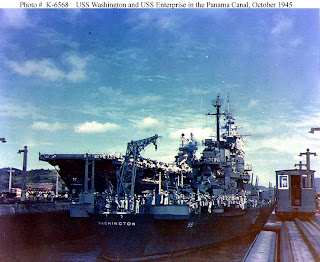 During the next year, Washington took part in operations to capture the Palaus, Leyte, Luzon, Iwo Jima and Okinawa, as well as supporting the fast carriers on their raids throughout the Western Pacific. She was undergoing overhaul during the last two months of the Pacific War and, in October 1945, steamed through the Panama Canal to the Atlantic. Her final active duty was to transport veteran servicemen home from Europe. USS Washington was placed out of commission in June 1947 and was in "mothballs" from then until May 1961, when she was sold for scrapping.


Info: Naval Historical Center
Posted by Lord K at 1:42 AM

Email ThisBlogThis!Share to TwitterShare to FacebookShare to Pinterest
Labels: navy, US, weapons