The 70-ton, 26-knot motor yacht Q. E. D., streamlined startler designed by and built for Dutch Airman Anthony Herman Gerard Fokker in his slickest airflow style, sank in the Hudson River near Yonkers, N. Y. Honeymooning on the borrowed boat were a bride and groom of five hours, friends of Fokker, when a fire started in an ornamental fireplace in an after cabin, spread quickly, driving honeymooners and crew overboard. At the launching a year ago, Designer Fokker mused: "I hope it will be obsolete within two years. . . . That is good. That is progress. Today there are too many yachts that outlive their owners. . . ."

Email ThisBlogThis!Share to TwitterShare to FacebookShare to Pinterest
Labels: design, US Photo by kaiserstein @ Flickr
Posted by Lord K at 1:08 AM No comments: Source: Branson DeCou archive
Posted by Lord K at 3:13 AM No comments: 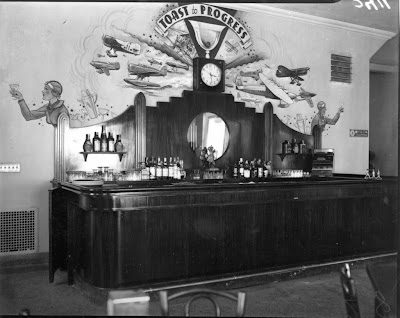 Email ThisBlogThis!Share to TwitterShare to FacebookShare to Pinterest
Labels: art, art-deco, photo, US The Bloch MB.480 was a French twin-engined torpedo-bomber/reconnaissance floatplane designed just before the start of the Second World War by Société des Avions Marcel Bloch. Only two were built, the French Navy deciding to use landplanes instead.
Posted by Lord K at 1:03 AM No comments: mikeyashworth writes on his Flickr page:
"A fine representation of one of the wonders of electrical engineering - over the years with London Transport I've been privileged to see a few of these 'sci-fi' beasts (and indeed move one). They are wonderful in action - real 'Metropolis' stuff - and I recall, I'm sure, that the old Birmingham Museum of Science & Industry (that joyful old place on Newhall St that we visited so often in the 1960s to press buttons and watch things work) had one that worked.
BT-H, part of AEI, were based at Rugby and were one of the great names in British electrical engineering. The advert notes that this was built for one of the trolleybus sub-stations, Dudley Hill, on the Bradford, Yorkshire, network - the system destined to be the last UK trolleybus operator until 1972".
Posted by Lord K at 5:56 AM No comments: via waralbum.ru
Posted by Lord K at 1:28 AM No comments: Via by paul.malon @ Flickr
Posted by Lord K at 1:15 AM No comments: Former central storehouse of one of the most significant European enterprises of the 20th century: the "Gutehoffnungshütte" (GHH) in Oberhausen, Ruhr.
Designed by Peter Behrens. Built 1921-1925.
Today: Industrial monument and new exhibition house of the Rhineland Industrial Museum (LVR-Industriemuseum) via Boston Public Library
Posted by Lord K at 1:15 AM No comments: Photographer: Arkady Shaikhet
1939
Posted by Lord K at 2:03 AM No comments:

Winged Chariot for a Superhero Luigi Russolo (1885-1947) was an Italian painter and self-taught musician. In 1913 he wrote The Art of Noises, which is considered to be one of the most important and influential texts in 20th century musical aesthetics. Russolo and his brother Antonio used instruments they called "intonarumori", which were acoustic noise generators that permitted the performer to create and control the dynamics and pitch of several different types of noises.
Russolo and Marinetti gave the first concert of Futurist music, complete with intonarumori, in April 1914 (causing a riot).
Posted by Lord K at 1:20 AM 1 comment:

A Passage to Africa The Breguet 530 Saigon was a civil version of the Breguet 521 long-range three-engine military reconnaissance flying boat. It was developed from the British Short S.8 Calcutta in 1932. Only two Br.530 were built, both used by Air France with its own names - 'Algerie' and 'Tunisie'.
Posted by Lord K at 1:18 AM No comments: via paul.malon @ Flickr
Posted by Lord K at 1:29 AM No comments:

Sure as the Sunrise This 1928 advert shows a single deck chassis built for Cardiff Corporation - and unusually doesn't make play of the slogan 'Sure as the Sunrise" that was Albion's tag-line.

Read more on mickeyashworth's page @ Flickr
Posted by Lord K at 2:03 AM No comments: