Email ThisBlogThis!Share to TwitterShare to FacebookShare to Pinterest
Labels: art, auto, design, US Artist: Carl Meurling
Posted by Lord K at 1:11 AM No comments: 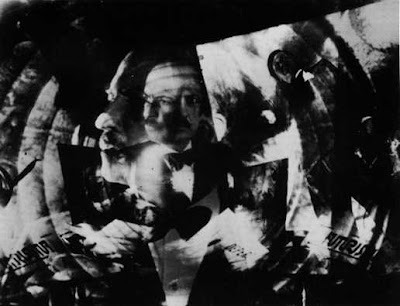 Portrait of Marinetti, by Tato

Source: Karen Pinkus article @ unknown.nu
Posted by Lord K at 1:20 AM No comments: Poster art by Richard Weiss @ Flickr
2007
© All rights reserved
Posted by Lord K at 1:32 AM No comments:

Good Morning, This Is BBC

BBC Broadcasting House, London
Construction of Broadcasting House began in 1932, and the building opened to the BBC's offices and radio operations on 14 May 1934, eight years after the corporation's establishment. George Val Myer designed the building in collaboration with the BBC's civil engineer, M T Tudsbery. The original interiors were the work of Raymond McGrath, an Australian-Irish architect. He directed a team which included Serge Chermayeff and Wells Coates and designed the vaudeville studio, the associated green and dressing rooms, and the dance and chamber music studios in a flowing Art Deco style. It was later said of his efforts that "the designs for the BBC gave the first real fillip to industrial design in England. " (Wikipedia) Read about real Rail Zeppelin @ Dieselpunks.org
Posted by Lord K at 1:15 AM 1 comment:

Down to the Foundations! From Makeup to Truck ALCOA and the Clarke Autotram Email ThisBlogThis!Share to TwitterShare to FacebookShare to Pinterest
Labels: auto, rail, US Drapacz Chmur (English: Skyscraper) is a historical building in Katowice, Silesia, Poland. It was the first skyscraper built in post-World War I Poland. Finished in 1934 after five years of construction, it made pioneering Polish use of steel frame construction. Today, Drapacz Chmur is considered the most spectacular and beautiful example of functionalism in Poland.
The building has seventeen stories, fourteen above the ground, and contained one of the first garbage chutes in Poland. It is 60 m tall and until 1955, it was the highest building in the country. It was designed by architect Tadeusz Kozłowski and structural engineer Stefan Bryła to house Polish Revenue Office employees.
Info: Wiki (EN, PL)
Photo by Lestat (Jan Mehlich) @ Wikimedia Commons
Posted by Lord K at 1:24 AM 1 comment: 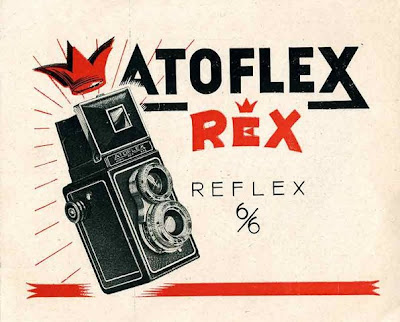 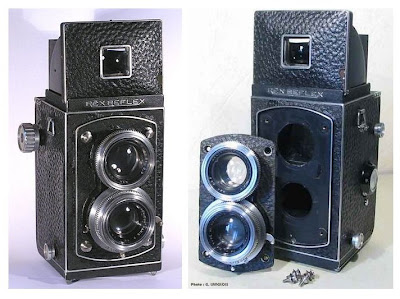 Source (in French, with more info & photos)
Posted by Lord K at 1:24 AM No comments: London Underground poster by Austin Cooper, 1930
One of a series of London museum posters issued by the Underground Group in c.1930 - this Austin Cooper showing a rare mix of images and also artist drawn lettering rather than the more commonly used Underground 'Johnston Sans' font.

From mikeyashworth's photostream @ Flickr
Posted by Lord K at 1:17 AM No comments: #3804 steam loco of the Nederlandse Spoorwegen (Dutch National Railways)
Source: Nico Split collection
Some info (and questions) on the NS 3800 Class @ Dieselpunks.org
Posted by Lord K at 1:12 AM No comments:

Too Hard, Too Heavy 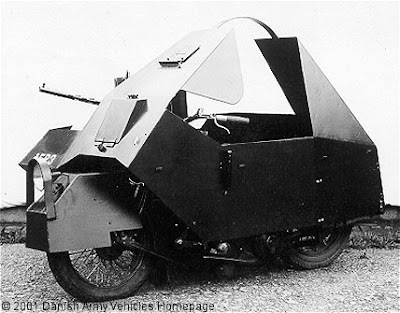 Harley Davidson VSC/LC (Landsverk 210)
A Harley Davidson was fitted a armor chassis build to Danish specifications by Landsverk (Sweden) in 1932. This configuration didn't perform well. Hard to steer on-road, and almost impossible to drive off-road due to the heavy chassis. Negotiations were held with Landsverk about a lighter chassis, but without any results and the motorcycle was de-mobbed in August 1933.
Picture courtesy of Ole Drostrup, Soenderborg
Source: Danish Army Vehicles
Posted by Lord K at 1:23 AM 3 comments: 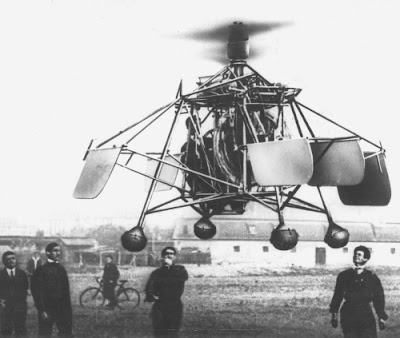 Hungary 1928
On September 9, 1928, Oszkár Asbóth took off vertically with his helicopter powered by a 120 HP nine-cylinder engine and propelled by two wooden propellers, each 4.35 meter in diameter, placed parallel above each other and rotating in opposite direction. Tires were replaced by four footballs to provide sufficient flexibility for landing. During the first flight, after 1100 rotations the plane swiftly took off, at ten meters stopped, hovered for some ten minutes, remained absolutely stable around all axes, than smoothly descended.
The two large wooden propellers raised Asbóth´s device into the air together with its pilot more than 200 times and hovered in the air for almost one hour, which was a great achievement, but because of their rigid propellers Absóth´s „helicopters" became unstable when moving forward or when subjected to a strong side wind.

By his good business sense Absóth was able to profit from his inventions. The British Air Ministry got an option of purchase of his helicopter in 1938.

Read more about Oszkár Asbóth
Posted by Lord K at 1:13 AM No comments:

Not Gone But Well Forgotten via paul.malon @ Flickr
Posted by Lord K at 1:14 AM No comments: A poster by Donald Brun
Posted by Lord K at 1:16 AM No comments: Savoia Marchetti S.M.75 of the Hungarian airline Malert in Berlin
1930s
Posted by Lord K at 2:03 AM No comments:

Dieselpunk is more than streamline design, weird weapons, elegant fashion and flying boats. It is music - melodies of old and sound of tomorrow. 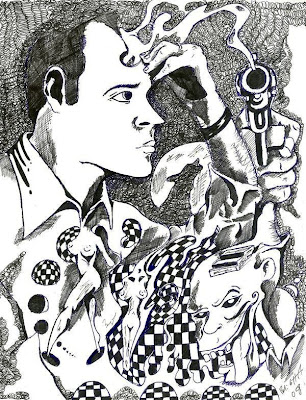 “Father of the Black Cat, Part I” offers not just new music, but a new approach to music all together. By embracing the independent fundraising platform of Kickstarter, Wolfgang and his band will give an all-access view into the creation of the album as well as Wolfgang’s personal insight into the songs themselves; songs Parker says are the most honest, and personally revealing he has ever written. Videos will be shot by the band as they rehearse, track, and hear the final mixes for the first time.
JOIN THE PROJECT. ENLIST NOW!
Backers can choose rewards ranging from .mp3 files of the songs to a hardcopy CD autographed by the entire band, hand written lyric sheets, and more. A few backers will have the chance to snag ultra-rare copies of Wolfgang’s early albums, “Hep Ciy Swing,” “Octoboure,” and the American edition of “Room Nineteen” autographed by the band to the individual backer.

A portrait of Wolfgang: from the Lovely Gianncarlo @ myspace
Posted by Lord K at 1:21 AM No comments:

Email ThisBlogThis!Share to TwitterShare to FacebookShare to Pinterest
Labels: music From the DLR Archive
Posted by Lord K at 1:27 AM No comments: Harold Bolas's first design for Parnall was the remarkable Panther; among its notable features was a birch ply monocoque fuselage of some depth with the pilot and observer placed high for a superb all-round view. The fuselage was hinged for shipboard stowage; for ditching the plane had a hydrovane ahead of the undercarriage as well as air-bag floatation gear.

From PARNALL - Bristol's Other Plane-maker by Alan Webb A poster by by Kees Van Der Laan
Posted by Lord K at 4:19 AM No comments: