The ninth British warship to bear the name Hermes was the first Royal Navy warship designed and built for use as an aircraft carrier. 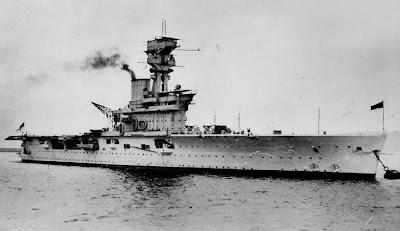 The 'island' structure sited on the starboard side of the flight deck included the funnel and a Gunnery Control position at the top of the mast. A special ventilation system was provided in the hangar to reduce the danger of fire from petrol fumes. New handing gear was used to assist in moving aircraft and an electric lift was fitted from the after end of the hangar to the flight deck. 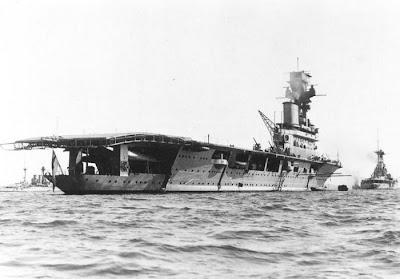 The original design allowed for 15 aircraft but by 1938 had increased to 20. In 1939 the total complement was 1,575 including aircrew and maintenance personnel. 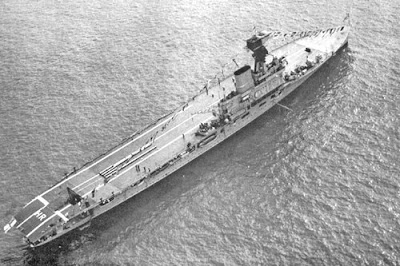 HMS Hermes proved to be very satisfactory in her designed role and was an excellent sea-boat with little roll.
Her full load displacement was about 12,900 tons with an overall length of 598 feet and a bean of 70 feet 9 outside bilges. She had a mean draught of 18 feet 9 inches. Armour protection was similar to that in light cruisers.
The armament fitted consisted of six 5.5 inch guns for defence against surface ships and AA defence of three 4" guns was provided. Before the outbreak of war additional close range weapons for use against aircraft were fitted and later during WW2 some 20mm guns. Replacement of the 5.5" armament by eight twin 4.5" guns was intended.
Geared turbines with a shaft horsepower of 40,000 driving 2 shafts gave a speed of 25 knots.
HMS Hermes was in use as an accommodation ship for officers under training in 1938 and brought forward for service in 1939. She was deployed in the Atlantic for trade protection duties for a brief period before the outbreak of war and was then transferred to the Indian Ocean. In April 1942 whilst deployed with the Eastern Fleet she came under air attack from a Japanese aircraft carrier with heavy loss of life after being hit by several bombs.
Source
Posted by Lord K at 12:02 AM